As you all know, road marathons are my thing. So a 1 mile race (on sand!) is approximately 25.2 miles outside of my comfort zone. But, I love a challenge and after the London Marathon my main priority was to just have some fun with running and events, so when Red Bull UK kindly invited me to the event, I had to say yes! (it also helped that my number 1 @whatcharlierannext lives about 1 mile so it was the perfect chance for a catch up & a sleep over!)

Race weekend rolled around, and I travelled down to Margate on the Friday night to stay with Charlie. We decided to go for a little shake out run and used it as the perfect excuse to go and check out the course which was being set up on the beach. As we approached the site I think we both had the same thing going through our brain… ‘OH SH*T!’

The man-made sand dunes were absolutely massive, and there was a lot of them! We had a quick chat with the event team that were there setting up the event and they too confirmed that they stepped it up from the previous year and the obstacles were bigger and steeper. Faaaaaaaabulous! 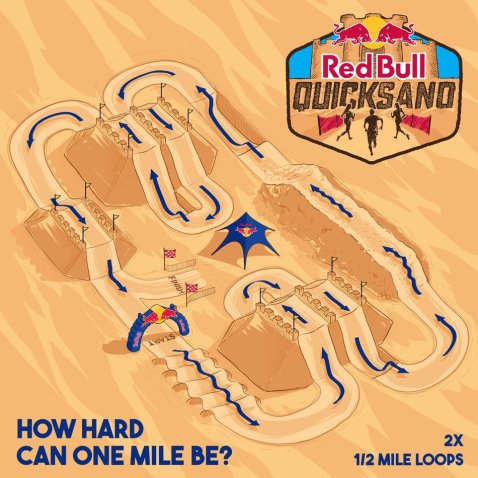 The race format was simple. There were a number of different heats (both for men & women) during which you were required to complete 2 x laps of the course, and the Top 50% of finishers then progressed to the semi final, and then again to the final. 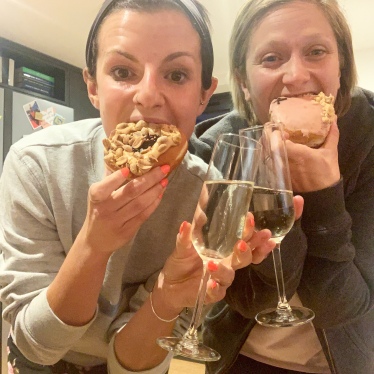 Soon enough it was the morning of the race, and fuelled by pasta, prosecco & doughnuts, Charlie and I made our way to the event village to get registered and ready for our heats. Once we arrived we found Helen (@framefitnesssouthhampton) & Helena (@marathon_runner92) and we all felt pretty similar… excited, but nervous for what was coming up! 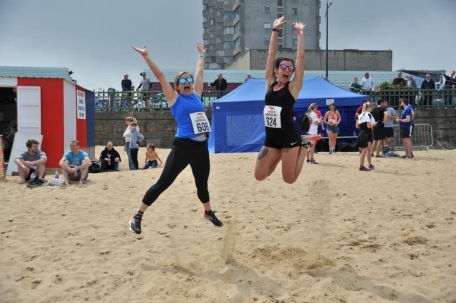 It is safe to say, Red bull really know how to put on an event. It was really well organised & registration was a quick and seamless process. The atmosphere on the beach was great too, and I think this was definitely helped by having Run Dem Crew there leading the warm ups, MC’ing and generally just helping to create an epic atmosphere!

After watching the last of the mens heat, it was finally our time to go! Charlie & Helen were in the first women’s heat (to which Charlie managed to finish in the Top 50% and progress to the Semi Final, as much as she didn’t want to! hahaaaaaaaa) and then finally it was my turn! 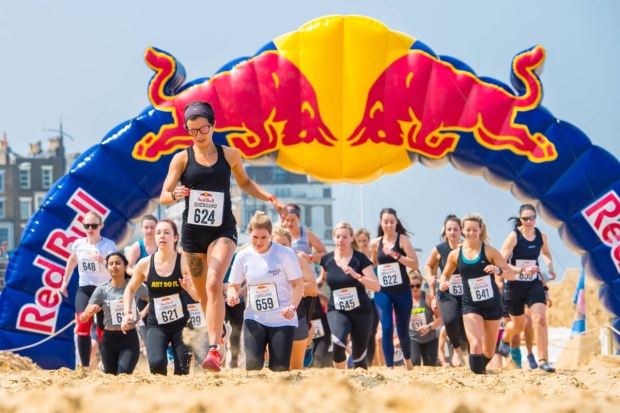 I can honestly say, that first lap was the hardest mile I have ever ran. I *maaaaay* have got slightly over excited at the start and went out far too quickly for the first lap, but I was feeling good! And then it happened, it was almost as if someone flicked a switch in my legs and they went from feeling strong, to feeling like two blocks of wood! That final lap was a slog, and after taking the lead for the first lap, I slipped back into second place, and I just had nothing left in me to push on. 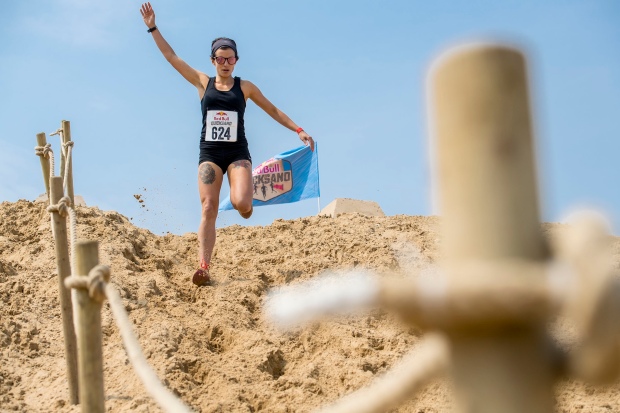 I was interviewed pretty much the second I crossed the line, I am surprised I even managed to talk as I honestly felt like I was going to throw up.

‘Speaking after the first heat, she said: “Right now, my legs are like jelly, I feel sick and my lungs are burning – and I just don’t feel like that at the end of a marathon. Because you’re working so hard for a short amount of time, it completely kills your body.” 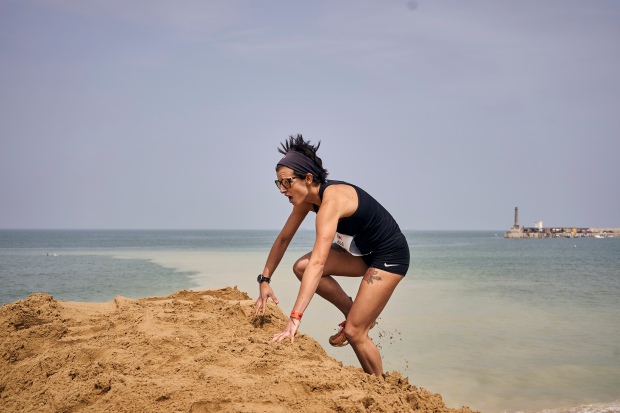 It was a bittersweet moment, I was pleased I finished 2nd and progressed to the semi final, but now I knew what I had let myself in for, at that moment I wasn’t really sure I wanted to run it again!

Luckily, there was about a 2 hour break before the next stage, so I got myself something to eat and started to prepare myself to run it again. Now I knew what to expect I knew that I couldn’t race off like a mad woman on that first lap, I needed to run smart! I also decided to run the next lap barefoot, I had seen others do it throughout the day and as the sand was soft and loose I thought it would be worth a shot, plus anyone that has run on sand before will know how annoying it is when your shoes and socks are full of sand! 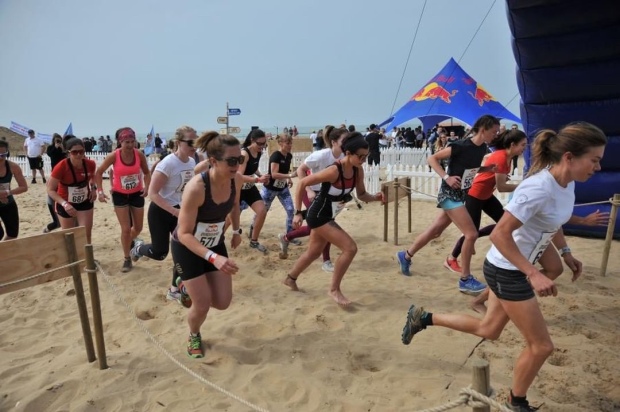 It was time for the semi-final, and this time it was different, as we all knew what to expect from the brutal course. I attempted to hold myself back for the first part of the course, and hung back in around 4th position, but my plan worked! I felt stronger as the lap went on and managed to push on for that second lap and once again finished in 2nd position! And I even managed to run it around 40 seconds quicker than the first heat.

So that was it, I was in the final! And this time, we didn’t get much of a chance to recover as the Final was only 30 minutes later. I grabbed a can of Red Bull as I needed that quick energy fix (and all the help I could get!) and got myself ready to go. 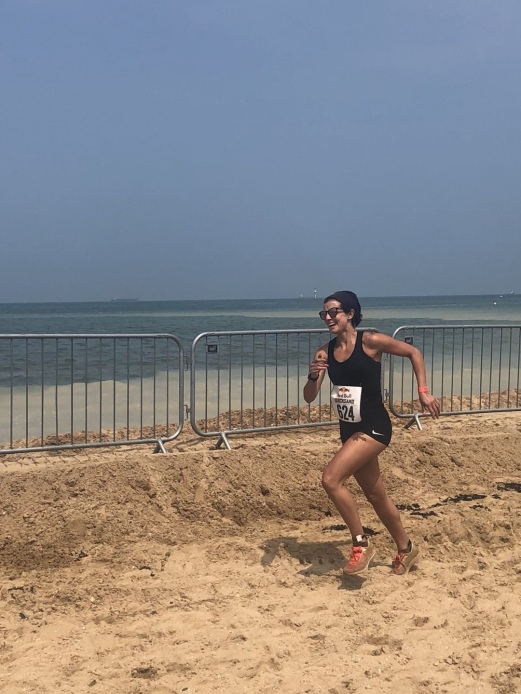 Although it was the final, I knew I still needed to be clever. My legs were cooked by this point and I knew if I went out too quickly I would suffer towards the end of the lap. Once we set off I purposely held myself back again, and although I was in the front pack, I hung back in around 4th for the first few climbs. Everyone was suffering by this point but my competitiveness was greater than the pain in my legs! I managed to get myself comfortably in 2nd position by the time we were on the final lap, and at one point I even caught up with the Andrea but she wasn’t giving up that easily and managed to push on once again.

By the time we reached the final climb, my legs were completely done. The final ‘sprint’ to the finish wasn’t pretty, I can’t really explain how tough it is to try and run quickly on ground that moves beneath you, but just believe me when I say.. it hurts! But I did it.. I grabbed my flag and crossed the line in 2nd place, and only 8 seconds away from 1st! Everything went a bit wobbly, from my legs to my head and I felt a bit out of it for a few seconds, but I was just so happy it was done… and that I didn’t have to do it again!!

To my surprise, my final lap was quicker yet again! I don’t really understand how my legs still worked, but it just showed how poorly I paced myself for that first lap!

Shortly after we finished, there was the winning presentations for both the Men & Women. The trophy was absolutely epic (and weighed a tonne!) and then we also got given a bottle of champagne… which we had to open and spray all over each other (don’t worry, I made sure I saved some to drink after!) 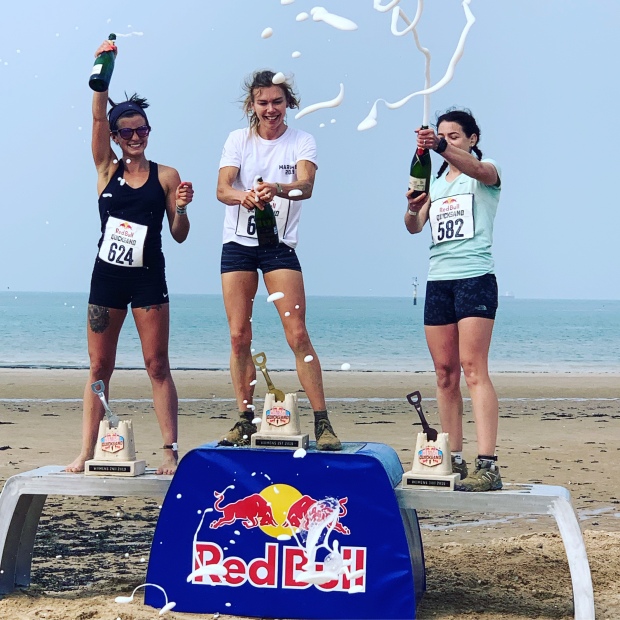 I mentioned it earlier, but Red Bull really do know how to put on an event! I will 100% be returning to the beaches of Margate next year, and its made me want to sign up to more of their events just because I know it will be an incredible experience (Redbull 400 anyone?!) 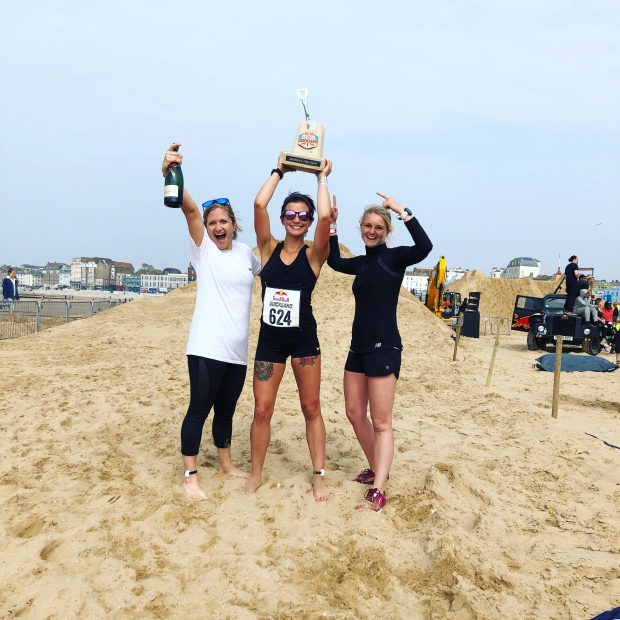 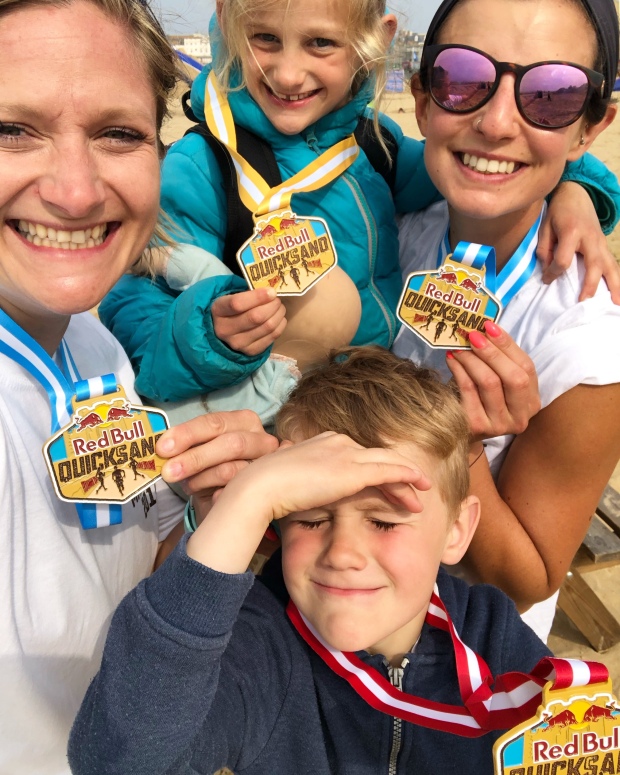 If you are looking for a new, fun, tough challenge for next year, I highly recommend this event! The 2020 event hasn’t been announced yet, but keep your eyes peeled on the website. You won’t regret it!

One thought on “Red Bull Quicksand 2019”