If you have never taken part in a large race before, then honestly, I don’t know how to explain the atmosphere on race morning. It’s just something else! You are surrounded by THOUSANDS of other people, who are all there to do the same thing… RUN! There’s just this buzz in the air that you don’t really get anywhere else – nerves, excitement, apprehension – it’s amazing!

I headed down to the start with Charlie and after the initial panic of not being able to find my bag drop 😬 (anyone else struggle with this?!) we were finally ready to go! We were in different start waves so we had to go our separate ways, but luckily itwouldn’t be long before I found some more familiar faces! Chris was an absolute hero and saved me a space in one of the hundreds of toilet queues (the less said about those toilets though, the better!) and I also got to see Mel!

But again soon enough we were on the move, and heading to our final positions before we would cross the start line! At this point, the nerves finally kicked in. My stomach felt like it was doing summersaults and the reality of what we were all about to take on set in… and my first thought when we got into our start pen.. ‘Bugger, I need a wee’ (more on that later 🤣) 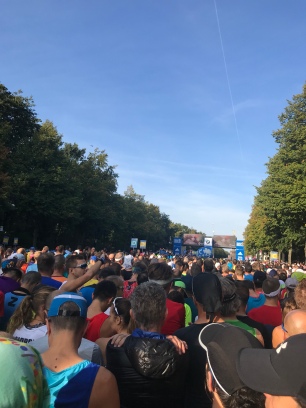 The build up in those final few minutes is enough to give you goosebumps, and soon enough the wheelchair races were being set off, then the elite introductions, and then it was our turn.

If I am being truthfully honest, I had no idea what my plan was for the race. I had decided due to my injury that I was going to take the pressure off and just enjoy it, but I think there was always still that part of me that wanted to see what I can do. As the start gun went off, I had a decision to make, and I decided to go with my gut & just go out at what I felt was a comfortable pace and see how long I could hold on for. I was excited, but fought every urge to keep it controlled & not go sprinting off!

As I was in starting block D, I crossed the line in just over a minute, and luckily didn’t have to fight my way through too many crowds, which I know can make such a difference to a race, so although it was still busy I felt like I could find my rhythm quite quickly.

It was shaping up to be a warm day, but after the crazy temps I experienced at London, I didn’t let this get to me. In fact I didn’t really let anything bother me, this was the most relaxed I had EVER felt before and during the start of a marathon, and I think it made such a difference to my race!

The miles ticked by so quickly, it felt like I reached 6 miles in the blink of an eye. I took my first gel as planned, but then I had a problem.. I now REALLY needed a wee, I didn’t want to stop or lose my rhythm sooooo… well, I don’t think you need me to spell it out to you. If it’s good enough for Paula, it’s good enough for me 😬😂

I felt a new sense of freedom after #weegate 🤣 and felt so much more comfortable as the miles continued to tick by. I decided that I was going to try and avoid counting down mile by mile, and instead focused on getting to the next mile stone of the Half Marathon (you know, the half way point that everyone knows isn’t really half way 😂)

By this point I was getting used to the water stations. I will admit when I first heard it was cups only, I did panic, but it wasn’t actually that bad! At every station I took a drink I slowed down to take a sip, poured the remainder over me and managed to get back to my pace almost straight away. All that worrying for nothing! I still much prefer being able to drink from a bottle, but it’s definitely given me a confidence boost for future races that use the cup option!

Soon enough I was approaching the elusive half way point, and was only 3 minutes outside of my current PB. What the hell was going on?! I honestly didn’t understand how my body & my legs were doing it! I took on another gel (and yes, they were shoved down my bra – it works for me!) and was just getting more and more excited that I was potentially going to get closer to my original goal then I ever thought I would.

How was I already over half way?! In a weird way I actually felt a little bit sad (no, I don’t understand it either!) but I think it was because I realised I wasn’t really taking ANYTHING in. I don’t remember seeing any amazing landmarks or buildings, all I was focusing on was putting one foot in front of the other, even the crowds became a bit of a blur.

Usually in a marathon I break the race down completely, setting myself mini milestones to reach, but this one was different. After the half way point my next focus was to get to 20 miles – as anyone who has ran a marathon before knows, that’s when the race really begins!

Once again the miles were ticking by so quickly I almost forgot to take my gel, but at 18 miles I took another and still felt like I had so much more in me.

I finally reached the magic 20 miles, I looked at my watch and realised I had just under 45 minutes to achieve my original goal of a sub 3 hour marathon. Part of me wishes I didn’t look, because as soon as I did.. that’s when the mind games started.

It was all going well until around mile 22. I took my final gel (which I got from the aid station) but unfortunately I think it was just that little bit too late. Fatigue was starting to set in, this was now becoming a mental battle of just getting to the next mile.

The one thing that was keeping me going was I knew the epic #cheersquad led by Becca & Lou we’re waiting for me at 37km. That was my next goal, to just get there and see some friendly faces!

Just before my watch buzzed 23 miles, I took my first walk break. It was only 10 seconds, but I needed it. I just counted out loud, took some deep breaths and said to myself ‘only a park run to go’ – my pace dropped for the next two miles, my legs felt heavy & I just couldn’t seem to get my pace back. But I wasn’t ready to give up just yet. I said to myself that I would give that final mile my everything.. and before I knew it, it was time to dig deep.

It was less than a mile to go, and all I was waiting to see was the infamous Brandenburg Gate! That’s when you know you’re almost done.. or, so I bloody thought 🤣

As I ran under the gate I honestly thought I was done, the crowds were getting larger & louder and I *thought* I could see the finish line. I had a quick glance at my watch and thought by some miracle I might have actually scraped a sub 3! But unfortunately.. this wasn’t the day I was going to do it!

My watch ticked over 3 hours and the finish line was just out of my reach. Did I feel disappointed? If I’m honest, a teeny tiny bit, but that all disappeared when I crossed the line.

I was done! Obviously I had the standard leg wobble as I crossed the finish line (I wonder if I’ll ever be able to cross one gracefully?! 🤣) but I felt amazing!

I couldn’t stop smiling, I collected my medal and then started the long walk to collect the rest of my post race goodies! I was desperate to see a friendly face, and as if by magic I bumped into Dai who had just completely smashed his own race and finally got his sub 3! Shortly after we were joined by Chris and after the looooooong walk to bag drop it was finally time to sit down, relax and celebrate what we all achieved!

For me, this was a near perfect race. The weeks leading up to it, I had no expectations and I think it just made the experience that whole lot better. I honestly didn’t think anything would top how I felt after the London Marathon – but, I think we have a new winner 🤩

Berlin, you were amazing! And it was made even more special that I was a part of the world record breaking race! This will certainly be a day I will never forget ❤️

My Tweets
Join 2,489 other followers