So, its been a while since I have done one of these! But what better way to kick off my return then with a a race review! This bank holiday Monday I headed down to London to take on the Vitality London 10,000 – alongside approx 14,000 other runners, including some of the countries best elite athletes!

I was lucky enough to get a place via my running club and after missing out last year I was really excited to be taking part, I had only heard good things about the race & how much everyone enjoyed it, plus racing in London always feels special to me, so I couldn’t wait to get out there and see what I could do!

My training had been going really well since the London Marathon, I had rested well, was slowly introducing tougher sessions back into my schedule, and I may have also ran a couple of local 10k races! I was feeling positive about the race, and was secretly hoping it was going to be my 3rd consecutive PB of the month, this however all changed the day before. I want this blog post to be positive, but I am not going to shy away from talking about the bad stuff too.  This has happened a few times to me now (and coincidentally always on the lead up to a big race in London!) but I get what I can only describe as ‘brain fog’ and just feel complete exhaustion the day before an event. I am not sure what it is, is it anxiety? Is it my version of pre race nerves? I really don’t know, but I know that it is something I need to deal with and to make sure it doesn’t keep happening, as it’s getting to the point where it is actually making me feel ill and considering pulling out of the race. Anyway, I will talk about this more another time.. so, back to the race!

I am pleased to say that luckily I woke up the morning of the race feeling really refreshed & so much more positive about it all! It was a very early start as I wanted to make sure I got into London with plenty of time (there is nothing worse then rushing around the morning of the race!)  and so that I was ready to meet up with everyone for a pre-race coffee, so I was up at 5am, down the train station around 6am and on my way by 6.30am!

Once we got off the train the temperature had definitely picked up, it was warm, very warm! I kept thinking ‘oh this isn’t so bad’ and then I realised it was still only 7.30am! It was gearing up to be another hot day, but I wasn’t even feeling stressed about it, all I kept thinking was at least it wasn’t a marathon (every cloud and all that!)

Due to my predicted race time I found myself with a Championship/Elite bib (gulp!) so on race morning when all of my friends were heading to the main start area, I headed off in the opposite direction to the Championship start. This was my first experience being up their with the elites at a big race like this (and I have no doubt this contributed to my pre race nerves!) but I tried to stay calm and just act like I belonged there, although I did already feel like a fraud! My first ‘OMG’ moment was when I headed to the Elite marquee and who was sat outside the front… only Sir Mo Farah! I couldn’t believe it, and I definitely wasn’t going to miss out on the opportunity of a photo! I then wished him luck for the race, mentioned the weather (because what else do us Brits do when we aren’t sure what to say?!) and went on my way!

I also finally got to meet another sensational runner called Hayley.

Hayley and I have been following each other on Instagram since the beginning of the year, we were both training for the London Marathon & had our own goals. And it is safe to say she absolutely smashed it! Honestly, she is such a huge inspiration to me and I just hope that one day I will be able to keep up with her! By the way – she ran a PB of 34.05 and finished 8th Female out of the whole race, I wasn’t kidding when I said she was sensational!

Before I knew it, and before I got round to doing a proper warm up (whoops!) it was the final call to get into the start pens. Once again the nerves kicked in as I was literally lining up a mere few metres behind the elite women and was surrounded by some of the UKs best club & amateur runners! I kept telling myself that I couldn’t get carried away, I had my goal pace and I did not want to screw it up by going off like a mad woman at the start!

After what seemed like the longest 30 seconds of my life, the race officially started! I was pleased at how in control I felt, and just ignored the large amount of runners sprinting past me, I couldn’t let someone else’s race control mine, so I put the ‘blinkers’ on and started my race.

The first couple of miles went by nicely, it was feeling really hot now, but I was running steadily, although my pace was slightly quick I wasn’t worried as it just meant I had a few seconds in the bank for later (or that was the plan anyway!) I was getting really thirsty and knew the first water station was fast approaching, I couldn’t wait for a drink!! Unfortunately this did not go to plan, a lot of races have now moved to using paper cups at the water stations, and whilst I understand why and that it is better for the environment, I have not quite yet managed to master the skill of drinking from a cup and running quickly! I had a second to decide what I wanted to do, and perhaps foolishly, I carried on running rather than stopping to walk and take on some fluid. It is safe to say I soon regretted this decision! The sun was baking down, I was very

Sean & I with our medals!

sweaty and my mouth was completely dry. It was also no coincidence that for miles 4 & 5 my pace dropped by around 20 seconds per mile, I just didn’t feel like I had the energy to push! Thankfully, the second water station was the usual plastic bottle, so I was able to take on some fluid as well as pouring some over myself & then just before the final mile a fellow runner from my club ran past me and encouraged me to ‘hang on to him’ – and luckily, this seemed to do the trick! I kept Sean in my sights for the remainder of the race and picked up my average pace again!

During my slower miles, I had completely given up on the idea of a PB. I had even given myself the pep talk abut how I had raced 3 times in the last month, I had already PB’d consecutively and that I was probably still in the final stages of recovery from the marathon. I had accepted that I wasn’t going to get my original goal, and started to come to terms with it before the race had even finished! We then soon reached the final part of the race, and it was back onto familiar ground again.. The Mall! 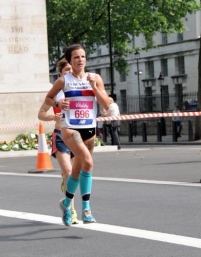 I started to pick up some speed again, I wanted a strong finish, and if I wasn’t going to get a PB I at least wanted to finish feeling like I had giving it 100%! I approached the ‘100m to go’ sign and spotted the clock… how had this happened?! I had just under 30 seconds before the clock got to 38 minutes! Well, that was all I needed… the gear shift happened and I went all out, there was no way I was letting this time go!

I crossed the line and checked my watch straight away, I couldn’t believe it, I had done it.. I was a sub 38 10k runner!! I bumped into Sean at the finish line & thanked him for spurring me on in the final mile, and we then headed to the finish area together to collect our medals! 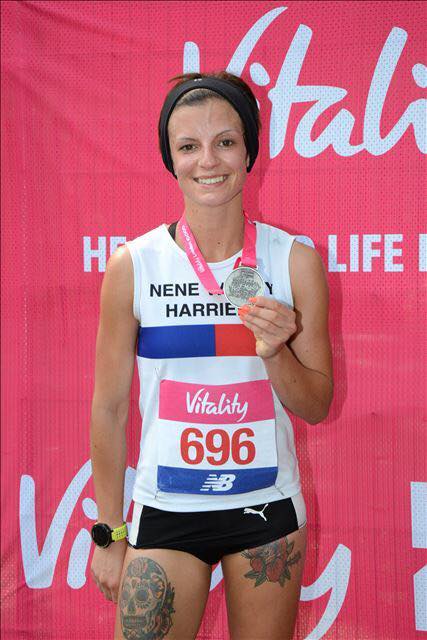 My official time was 37.53 – I was so happy with my new PB, especially after giving up on it part way through the race, I am just pleased now I managed to hang on and give it that final push at the end!

I personally really enjoyed the whole event, from the start to finish. I know that I was fortunate enough to not have to experience the long toilet queues or overly crowded start areas, but I would like to think that even if I was in the mass start, it would not have ruined the day for me. My only negative would be the first water station, but I know that is something I need to get better with as more races go in that direction!

London Marathon Events know how to put on a good race, right from the moment you sign up to the end of the race the organisation & information available is second to none. I will always be a fan of their events, and even though their photos are extortionate (cough cough!) I will definitely be returning year after year. 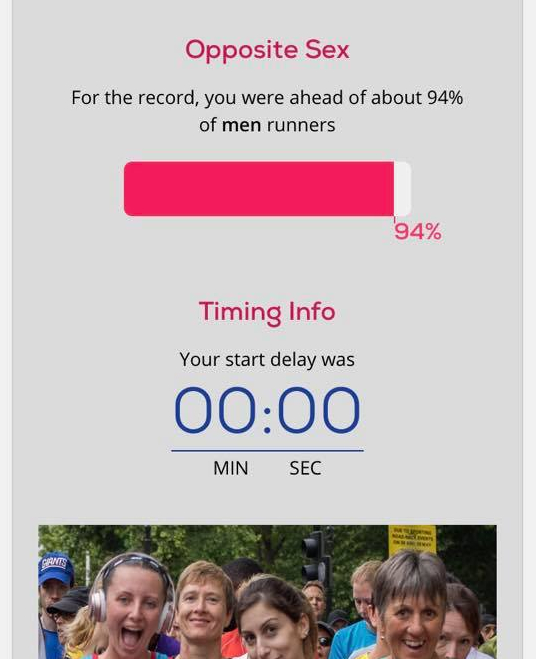